Find Out More
REQUEST CALL BACK 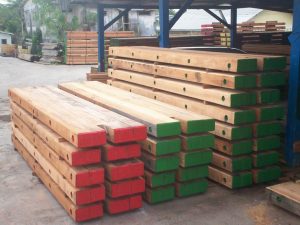 Over 40 years of experience underpins Birkett Bog Mats’ trusted reputation in the UK and global markets. We are a British business and a major supplier of timber access mats (or bog and crane mats as they are also known) exporting all around the world from our base in Rowrah, West Cumbria.

The company was established in 1974, as a fencing contractor supplying companies in Cumbria. It quickly became one of the UK’s leading fencing suppliers to the pipeline fencing market, becoming known as a family firm with honest values and ethics.

In 1993, Juanita Watts (formerly Birkett) identified a gap in the market for the ‘supply only’ of pipeline materials and began to use her managerial expertise to develop this side of Birkett’s business. Very quickly the company began to supply materials to many of the leading gas pipeline companies in the UK and Ireland as well as internationally.

In the early 2000s, a very large client, who was one of the UK’s leading pipeline companies at the time, asked Juanita to look into the sourcing and supply of hardwood bog mats. The client had been the victim of unreliable supply and had suffered quality issues with the mats they had been receiving from their existing crane mat supplier. Knowing that Birkett was a company they could trust, they relied on Juanita to come up with a solution. That is exactly what Juanita did and, as a result, Birkett Bog Mats was born and soon became a major player in the bog mat industry.

Within ten years, Birkett Bog Mats had established a firm foothold in the industry, working with major sawmills throughout Europe, Africa and South America. The company focuses on providing clients with the best quality mats available, but at a value-for-money price. With this formula being underpinned by Birkett Bog Mats’ unswerving commitment to customer service, it is no surprise that the company has become one of the UK and Europe’s leading bog and crane mat suppliers.

About Our Bog Mats

Our tough hardwood oak bog mats, weighing between 300 kg and 1200 kg dependent on size, have proved themselves time and again and are a huge asset at construction sites, civil engineering works and pipeline projects. These, along with dredging sites, energy plants and bridging works, are the day-to-day environments for our bog mats, but they have also been used in projects as prestigious as the London Olympics stadium and equestrian venue.

Whether the main requirement for use is to support cranes and heavy plant on soft ground, provide an even surface, protect the environment or provide a jetty or temporary access across water, our reliable bog and crane mats excel.

About Our Customer Service

As well as providing excellent quality bog mats, our additional strengths lie in our strong focus on customer service and our ability to project manage the haulage and logistical process to deliver our bog mats to your site on time wherever you operate. It is little wonder we win multi-million pound contracts and send our mats to locations as far-flung as New Caledonia and the Ukraine. Well-known international companies are increasingly turning to us and our fast and efficient distribution network enables us to offer delivery throughout the UK, Ireland and Europe.

We are constantly looking for ways to more fully meet our customer’s needs. For instance, recognising that some construction and civil engineering projects prefer to hire rather than purchase bog mats outright, we have also created an attractive hire option for our customers. It is this customer-focused approach, together with our quality bog mats, that has won us such a loyal and satisfied client base.

We can't be beaten
on price.

Enter the code #birketts100 when you contact us through our form and get a £100 discount* on your order.